For the first time I was able to attend the white wine festival at the Herzlia marina, now in it’s fourth year. Although this isn’t the way I usually celebrate American Independence Day, a festival of white wines was just perfect for this warm summer evening, even though there were no fireworks.

One winery, Zimbalista,  particularly interested me since I’d never heard of it. Zimbalista makes only white wines, all from their own grapes, which they grow at Moshav Avigdor. Having no actual winery of their own, Zimbalista employs the services of the Ella Valley winery to produce their wines. As a result, all Zimbalista wines are kosher, which is a significant marketing advantage. I tried two of Zimbalista’s wines, both unoaked, and both, I believe, 100% varietals. 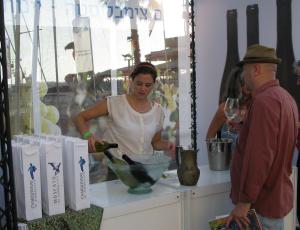 First up was a 2011 Sauvignon Blanc. Medium bodied and a bit fruity, this is a very well balanced and refreshing Sauvignion Blanc. Next I tasted the 2011 Chardonnay, which was surprisingly light, and not at all what I expected of a Chardonnay. As a sitting outdoors in the evening sipping wine, this Chardonnay will be quite pleasant, and I believe it will go well with delicate dishes like lightly seasoned trout or sole, but for foods with a more dominant flavor, I would recommend a more full bodied Chardonnay. Zimblista also had a Moscato on offer, but as I am not a big fan of semi-dry wines, I gave it a miss. Also, tasting the sweeter wines makes it more difficult for me to properly appreciate the drier ones later on.

After tasting the wines, I spent some time talking to Elena Zimbalista who is responsible for the vineyards. Hopefully I will have an opportunity to visit sometime soon.

Next in line was the Mond winery where I tried their 2011 Chardonnay – Chenin Blanc blend. I do not recall every having such a blend, and this one was extremely dry and crisp, which suited me quite well. There was also a bit of sourness with this wine, which can be a bit off putting when drinking it on its own but which will enhance the flavors of food.

At the Tishbi table I tried their 2011 Viognier. I am a big fan of Viognier, and this is Tishbi’s first, but it was not dry enough for my taste. Still I’m sure that many people will find it quite enjoyable.

Quite a number of the wines at the festival were imports. My favorites of these were an Austrailian 2010 Savignon Blanc – Semillion blend from a winery called Johnny Q, and an Italian (Sartori) 2010 Pinot Grigio.  Though rather different in character, both of these were light and crisp, and just right for the hot weather.

My favorite white import, and favorite Sauvignon Blanc of the evening overall, was was the 2010 Marlborough Sauvignon Blanc from New Zealand. Most Sauvignon Blanc I have sampled recently, and especially most of the Israel offerings, are fruitier than I prefer, but this wine was bone dry and grassy; just right for me. 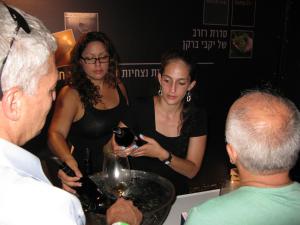 I found the best value for money of the evening at the Teperberg and Barkan tables. Teperberg’s just bottled 2011 Viognier sells for about NIS 50 and it is very pleasant. The 2011 Sauvignon Blanc, while not my favorite, makes a very respectable cellar defender at two for NIS 80. Teperberg’s 2010 Chardonnay Reserve (ten months in new oak) is medium to full bodied and not too fruity.

Teperberg also had a sparkling wine labeled as Brut that, in my opinion, was not so so Brut.

Barkan’s Sauvignon Blanc Reserve was not to my taste at all, but the medium bodied Chardonnay Reserve was delightful, and quite a good value at about NIS 50.

The most interesting wine of the evening was Tura’s 2010 Chardonnay. Aged for ten months in medium+ toasted new oak this chardonnay is seriously smokey, actually reminding me a bit of Dalwhinnie scotch. The smokiness was so intense that it was actually difficult to taste the wine. From the degree of smokiness I would have thought the barrels to have a heavy rather than medium+ toast. Just goes to show how much I still have to learn.

Before deciding whether or not I like this wine, I’d like to try it with food. Perhaps with more time in the glass some of the smokiness will dissipate, making the wine more approachable.

My last wine stop was Netofa where I tried two vintages of their Chenin Blanc, 2010 and 2011. While the 2011 was pleasant but unremarkable, the 2010 was drier, smoother, and more refined. I enjoyed it very much.

Earlier in the evening I passed the Kawar arak table, promising to return after finishing my round of wines. After sampling arak I don’t think I’d have been able to taste anything with the wines. Kawar produces four different araks ranging from 43% to 53% alcohol content. All are made from the same three ingredients – grape alcohol, anise seed, and water – but the difference in flavor and “texture” among the them is remarkable. 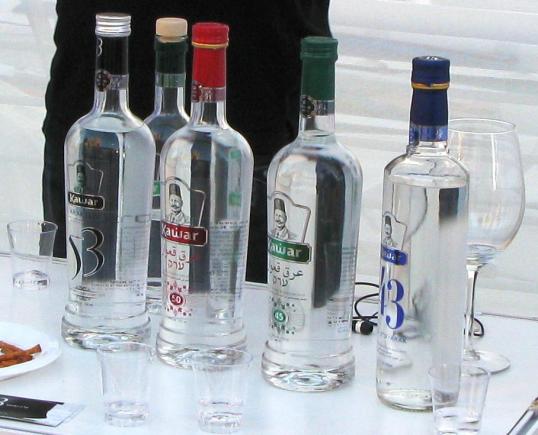 Other than the alcohol content, I suspect there may differences in the process as well, resulting in the dramatic differences. The 43% is relatively mild (for arak) and suitable for the warm weather. For rainy cold winter weather, Kawar’s 53% “Premium” arak is just right. I will definitely have to try these again with a clean palate in order to discern the nuances.

Along with the wine and spirits there were several olive oil and cheese manufacturers offering their wares for sampling and sale. I am used to the wide range of wines available, but the range of olive oil is also impressive. One producer had six or seven different oils ranging from mild in flavor to quite strong. Each was made from a different variety of olive with the exception of one “house” blend that fell somewhere in the middle of the range.

Among the dairies I especially enjoyed the offerings of Manno & Debbie, who make excellent goats’ milk cheeses in Moshav Matta. This dairy absolutely warrants a visit.

As at most such wine events, the atmosphere was laid back and relaxed, with pleasant light jazz playing in the background. A big thank you to the organizers who made this such an enjoyable and successful event. I’m already looking forward to next year.